John Sinclair one of the founders and the brains behind this website, was very impressed with the British General Rowcroft
and his thinking in regards to his Corps REME and how it was relevant to our own Corps RAEME.
Below is an article by General Rowcroft that could have been written with RAEME in mind. 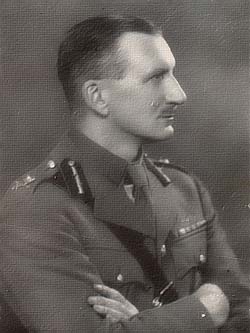 It was with much pleasure that I accepted the Editor's invitation to write a short introduction to this number of British Machine Tool Engineering, which deals at considerable length with the activities of the Corps of Royal Electrical and Mechanical Engineers.

It is, too, a source of great gratification to the Corps that an engineers' journal is presenting to its engineering public the story of one of the two main engineering corps in the Army, while the close touch established between the Editor and the R.E.M.E. has, I hope, given him as much pleasure as it has given to us.

It is hoped that the details given in later pages will be of interest to all engineers, even to those who have no direct personal link with the Corps. Engineers are a strong brotherhood and I feel sure that the objects and duties of their brothers in uniform will not fail to interest the larger circle of those from whose midst many thousands have stepped to take their part in this most exacting and mechanised of wars.

The R.E.M.E. was formed only on October 1st, 1942, with the express aim of collecting into one corps all the tradesmen required to maintain the immensely varied electrical and mechanical equipment of the Army, and so to save in overheads, to increase efficiency, and to ensure so far as possible in wartime that every tradesman is employed at his trade, and is not employed in carrying out military duties unconnected therewith.

This last object is not entirely attainable, because so mobile and fluid is modern war, and so varied are the possible forms of attack and defence, that every man in uniform (with the exception of the Chaplaincy and Medical Services) must first be trained as a fighter in order that he may have a capacity to overcome his enemies to enable him to carry out (in the case of specialist corps) his technical duties.

This combative element of his work may include passive and active defence against air attack or long range bombardment, the defence of a camp against marauding light forces or the more direct methods of attack and defence to enable damaged equipment to be removed from the battlefield itself or its vicinity in order that it may be restored to serviceable condition, or that its components may be removed and the undamaged ones re-utilised.

When it is realised that the prime military aim of the Corps is to keep, at all times, the maximum quantity of battleworthy equipment in the hands of the troops it is clear that the Corps must both fight and work, and further that, if it cannot do the former, its individual members may not survive to do the latter. It is better to be a live soldier-technician than a dead super-technician!

Allied to this ability to use his arms is the need for the R.E.M.E. soldier to be able to look after his own health and bodily needs. A Corps such as this frequently operates in "penny-packets" which are thrown on their own resources, not only for protection but also for hygiene, subsistence and accommodation. It is essential, therefore, that its members should be capable of maintaining themselves in a state of physical efficiency under the most varied circumstances, for they may be called upon to operate anywhere from the Arctic Circle to the Tropics.

Remember that the R.E.M.E. finds the white cadres or the complete units for electrical and mechanical maintenance of the forces in the Faroes, the U.K., Central Mediterranean, M.E., East and West Africa, Iraq and Persia, India (where they form the nucleus of the Indian Electrical and Mechanical Engineers), the Caribbean and a host of smaller outposts and garrisons. All of these have fighting forces or coast defence or A.A. units requiring daily maintenance.

I should mention here that the Dominions, for the most part, run comparable E.M.E. Corps, not always under the same name.

The nature of the work, calling for expert knowledge of armaments, small arms, fighting and transport vehicles, fire control instruments of great complexity and delicacy, wireless apparatus, radiolocation and similar types of plant, searchlights, road-building and constructional appliances of a mechanical nature, cipher machines and, in fact, all army equipment of a mechanical or electrical twist down to the humble push bike, is immensely varied and all falls within the R.E.M.E. net.

Just how all these are dealt with is detailed in the article in this Journal.

The administrative problems alone are prodigious, for when the decision was taken to create the Corps, it was wisely ruled that this Corps should be a self-contained combatant branch of the Army, responsible for its own military and technical training and its own administration.

The nature of its personnel for the most part took care of the technical training (although numerous courses of instruction in special equipmeets are necessary), but the military training and administration had to be put on its feet by a special effort, the aim being to make every officer and man a proficient soldier and, at the same time, to avoid divorcing technical people from employment at their trades.

A few cases must occur where personnel who have been posted away from their units, through wounds or sickness, have to be held in holding and training battalions pending their re-absorption, but even in these cases arrangemeets are made, when their stay is anything but of the briefest, for them to get at least part-time employment at their trade.

Again, when a unit is in process of mobilising to go overseas or to join a Force for any special role, there is a short time during which the process of mobilisation militates against the employment of all personnel at their trade. Such periods are, however, kept rigidly down to a minimum consistent with efficient mobilisation.

When considering the work of the R.E.M.E., sight must by no means be lost of the very heavy maintenance work thrown on the Corps by the Air Defences and Coast Defences of Great Britain and by the needs of the training units of all arms in the U.K. which are constantly turning out trainees to feed the ever-hungry forces engaged in active operations throughout the world.

The air and coast defences in some parts of the country are in almost daily or nightly action, and the R.E.M.E. of the A.A. Command and of the Army Commands maintaining coast defence, is continually on its toes repairing, modifying and servicing equipment .. much of the work being done, of necessity, on the actual gunsites. The repair of the over-worked training equipment is, in itself, an enormous commitment.

For this work at home, as well as for the static heavy repair work in the large base workshops overseas, a large number of civilian tradesmen of nearly every race in and outside of the British Empire is employed; the total of these civilian employees alone runs into tens of thousands.

Enough has been said, I hope, to give a picture of the magnitude of the task. We can claim, I also hope, a fair measure of success to date. The results of the R.E.M.E. services in the Ist and 8th Armies need no comment from me.

You must take it as axiomatic that the working of these services behind these great fighting organisations from the home feeding units to the overseas bases and on up the L. of C. to the actual Army Areas is no less carefully planned and executed.

The R.E.M.E. then has given much to the country and gives it gladly, both in life and Limb and in technical skill. I dare to hope that the country will not be unmindful of this when the troops come home, and I can safely assert that any engineering employer who finds employment for an ex-soldier who has worn on his arm the blue/yellow/red strip of the R.E.M.E. will find employment for a man who knows and loves his craft, and has learned in the hard school of war the value of service in the best sense of the word.