Military Payment Certificates were paper money to be used by American soldiers in lieu of dollars in foreign operational areas. In Vietnam we were issued with American MPCs by the Army Pay Office in lieu of Australian Dollars. I don't remember the conversion rate.

MPCs were first issued by the United States to be used by their soldiers in Europe 1946. They have not been used since 1973.

In June 1968, the word was around that the Americans were about to change the MPC, (Military Payment Certificates) this was done in secret so all those on the black market and those trafficking in illegal MPC would be caught and their currency immediately becomes worthless.

One of the enterprising lads at 102Fd.Wksp. had a rather fancy Monopoly set that the money looked a lot like MPC, with the rumour going around, he and a few of his mates thought they would take advantage of the opportunity, so they grabbed a handful of fancy money each and headed for the bright lights of Vung Tau.

They got away with it and had a great time in the bars and the use of the girls as well. If any of them were Cherry Boys, after that night, their fruit was well and truly picked. 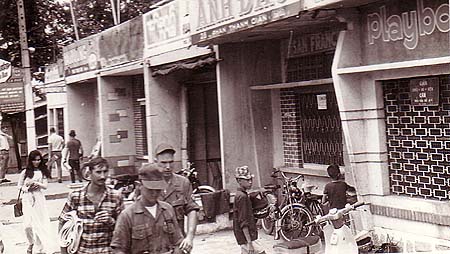 A Street of Bars

I was leaving the main gate for Nui Dat next day about lunch time, just in time to witness a number of Mommasans at the main gate with a hand fulls of Monopoly Money, demanding to see the Padre.

Some months later I ran across Padre Bedford and I asked him what was the outcome of the Mommasans saga? He laughed, and suggested that if he knew who the perpetrators were, he could have completed their Monopoly set.