Changing a Centurion Engine in the Field

Coincidences
Brad Baker had his tank, 169109, at Dorrogo NSW and lived in Brisbane .He wanted it closer to home and rang me. I put out a call for anyone close to Brisbane with some land where Brad could park 169109. Allan Hill, a gunner with the Squadron in Vietnam responded. I asked which tank he was on in Vietnam . He said, "169109 with Callsign 33 Bravo" I did not believe him. Allan then sent me photos of himself with 169109 in Vietnam! (They are below)

Ah well, apologies to the great Banjo, one shouldn't fiddle with what he doesn't know.
I do, however, know something about changing an engine in a Centurion Tank.I had a hand in a few engine changes while in South Vietnam helping Harry Holt go "all the way with LBJ". 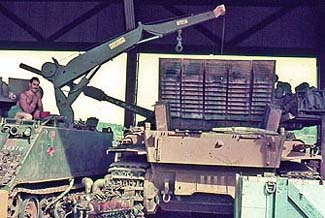 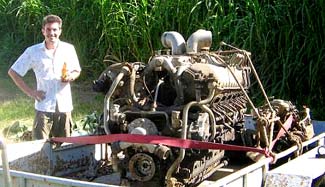 photo – Col Filtness
Brad Baker with the engine removed from his Centurion, 169109 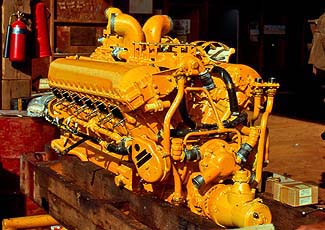 At the sharp end, the procedure usually went like this:

You, my friend, don't have the luxury of all that good stuff. You have a tank with a duff engine and need to know how to get the engine out of there and a new/replacement one in.

In place of an FRT, you'll have a couple of good mates who don't mind working upside down for a couple of, several hours and a patient partner who, although she hates the dammed thing, and what it costs, is prepared to keep the coffee up to the workers. Beware the hard stuff till the job is done

I've also added a little tale to tell you about my first field engine change. I think you may enjoy it more after you've done your own, it will have more meaning then.

Late in 1968 I went on pre-em leave destined for the yet-to-be-formed Independent Armd Sqn Wksp for deployment with the tanks to Vietnam. Alas, while I wasn't watching. Dennis Kerr slipped under my guard.

So, a year later, 106 Field Workshop (newly operational in Nui Dat on 1 Nov 69) became my home instead. I had come from the 1st Armd Regt LAD at Puckapunyal

For the first couple of weeks I was overseer to a group of guys laying sandbags and erecting tents. Then, one November afternoon, a sudden urgency permeated the area.

We hadn't even been issued with tool kits.

I hunted around, found three guys who looked like they might know where a tank kept its engine and after a lot of feverish running about the four of us plus the engine were on our way to FSB Julia.

Here we were welcomed with open arms by the Squadron Tech.Officer (little did he know what sparse experience we had). Cpl Gavin Bicknell and myself had witnessed/assisted the old dodderer, Cpl Frank Owen, in the removal of an engine at Pucka. But, that was the sum total of our expertise.

FSB Julia proved to be just an overnight halt and next morning the group and engine transferred to a Yank Tracked Load Carrier to go deeper into the bush.

While waiting for the transfer I noticed a Yank grunt come in through the wire busily ejecting every round in his M16 into the dirt and not stopping to pick them up. (I later found out that to many Yanks a weapon was not Safe unless it had no ammo in it). This didn't fill me with confidence as we were to place ourselves in the tender care of the Americans for the balance of the trip.

We arrived at our destination latish in the morning to be told that the tank would be required by 1100hrs the following day — we had approval to work through the night. That, in itself, raised some problems; we had only a single torch between us.

We battled gamely through the night — get the torch — identify what it was you wanted to work on — hand the torch on to the next man —.

The real fun started when we tried to put the new engine back in. One of the mounting bolts was bent and because they are captive in the water rail there was no way to straighten it. Someone (me as it turned out) had to get under the tank and attempt to guide the bolt into position.

No big deal you say

I agree! But, it was dark and the tank crew had dropped 33 gallons of water and 13 gals. of oil right where I wanted to be.

We eventually succeeded in bedding the engine down and the rest of the installation went smoothly. Funny thing though, when we were finished I counted 35 assorted bolts, nuts and washers we hadn't found a home for. Everything worked so we decided that the Centurion was obviously over engineered.

Job over in 22hrs.( I was later to take part in an engine change with a practiced crew in daylight in 10.5 hrs).

We threw our tool kits into the engine box along with the duff engine and bummed a chopper ride back to 106.

The OC, Maj. Hicks-Hall, was kind enough to say well done and to authorize a new issue of working dress

And that's the saga of the first FRT.

We learnt a lot about preparedness and to my knowledge were never caught out again. I took part in about ten engine changes while at 106 but the first remains strongest in my memory.