Selection and Maintenance of the Aim

Surprise can decisively shift the balance of combat power. By seeking surprise, forces can achieve success well out of proportion to the effort expended. Rapid advances in surveillance technology and mass communication make it increasingly difficult to mask or cloak large-scale marshaling or movement of personnel and equipment. The enemy need not be taken completely by surprise but only become aware too late to react effectively. Factors contributing to surprise include speed, effective intelligence, deception, application of unexpected combat power, operations security (OPSEC), and variations in tactics and methods of operation. Surprise can be in tempo, size of force, direction or location of main effort, and timing. Deception can aid the probability of achieving surprise.

Sound played a big part in the war in Vietnam as it does in any war.

Hearing the sound of tracks screeching and the roar of a large engine you could be sure it was a Centurion Tank moving about.

An APC has a distinctive sound, a softer sound than a Centurion Tank because it had different tracks, in that, they are smaller and are padded with rubber. The diesel engine was distinctive in sound.

The sound of a M16 Rifle was distinctive; some called the sound a bark

The enemy would identify these sounds and marry them up with the size of the force they could be up against.

Usually a battalion will tackle a company; a company will take on a platoon;a platoon a section and a section, individuals.

The SAS discovered that when an L1A1 self loading rifle with the flash eliminator removed was fired, it sounded almost identical to an 50cal machine gun. Further they discovered that a skilled soldier, spacing his shots, from an L1A1, converted to automatic and with the flash eliminator removed, could give the impression that he was firing a 50cal machine gun; falsely indicating the presence of armoured vehicles and a larger force of infantry. The effect the sound of such a weapon would have on the actions of an enemy patrol on locating elements of an SAS patrol is easily imagined.

As Task Force Armourer, I backed up the Unit Armourers servicing the battalions and the SAS Squadron. It was urgent for SAS immediate operational needs (especially for the weapon carried by the forward scout) that the splitting of the barrels and conversion to automatic fire of the L1A1 rifles be solved.

Barrel Failure:- It was obvious that threaded area that was failing needed to be reinforced. I made up a feral (like a treaded sleeve with a blind end) that screwed onto the barrel replacing the flash eliminator. This was successful in preventing the splitting while not interfering with the sound of the weapon. 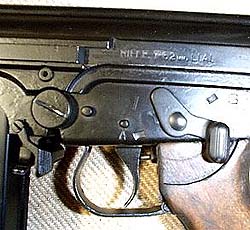 Automatic Firing:- There were a number of methods available to convert the self loading rifle so that it fire on automatic.