At Puckapunyal, around 1958, I was posted from 1 Armd Regt LAD to Pucka Area Wksp. I saw first hand the repair Centurion Tanks and noted especially the removal and replacement of suspension stations.

This assembly is lifted into position with an overhead lift using an eye cast into the top. The track guards and bins needed to be removed to enable this. I thought there must be an easier way

I am publishing this article not so much for its detail but as an example of deliberatedly developing the methods needed to enable the exchange of heavy assemblies by Forward Repair Teams in the field. Typically three aspects have to be considered

On arrival at 106 Field Workshop in 1968 I saw that the track guards and bins first were being removed first when exchanging suspension stations; a time consuming practice. I made up another frame, as above, which improved the situation in the shop.

However,in the bush, on muddy or dusty uneven ground, pushing a jack with a frame and a heavy suspension station on it was virtually impossible.

The answer was to fit a sheet of 6ftx4ftx¼in steel plate to be carried permanently in the base of the Fitters Track. This not only provided a useful work platform for other types of repair but buffered the Fitters Track from mines damage.

Tools and Repair Parts and Supplies

I designed a box to be added to this to hold all the necessary spares and repair equipment and tools needed for the removal a damaged station and fitment of a replacement. I included.

For those may wonder why the GE Platoon did the Centurion Idler, Final Drives and the Suspension Station replacements in the workshop and in the field, it was because the GE Platoon developed the expertise needed. 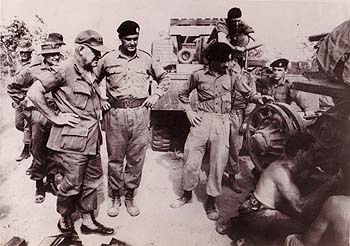 One of the first outings for the field jig and pack was to FSB Julia in Feb 1969.