When the Centurions Tanks first arrived at Puckapunyal and the familiarisation began with constant shoots on the range, it was the Armament Fitter that was required to attend.

The main problem those days was the machine guns, the BESA, which later was replaced by the 30 Cal Browning MG, the BESA’s used to get extremely hot and had a habit of cooking off the ammunition in the cartridge bag or in some cases, if you carried out the first IA using a heavy hand, cock the weapon, the round went on the floor and when it cooked off you ended up with a bruised ankle or leg.

In all the years I spent at 1 Armd. Regt. LAD and at Puckapunal Area Workshops I never saw a Vehicle Mechanic on the range, except when there was an exercise on. 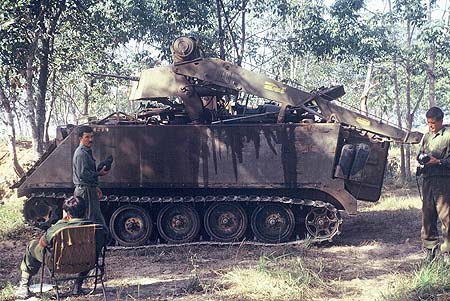 Recently I was amazed when told by Cpl. Gavin Bicknell that when he was in Vietnam in 1 Armd Sqn Wksp. they didnt have in their Forward Repair Team an Armament Fitter; if they required one, he was called forward. This probably is the cause of so many barrel changes, the inspection was left to the crews and it appears that the PBLLG was not used when it should have been.

The lack of an Armament Fitter in the field would also explain that whenever I was called up to a Fire Support Base, after I had finished by allocated task it was my habit before I left the FSB to walk around all the tanks and ask if they had any problems. It wasnt unusual to be asked to look at some fault in the gunnery and it almost was always a problem with the Auto Lock. It happened so often that I started carrying a spare with me.

Centurion Tanks are first and foremost a fighting vehicle with its main role being to deal with the enemy with its firepower. Therefore it is imperative that there be in the first line of repair, the FRT, an Armament Fitter with his tools and gauges so that he can carry out his role of making sure that the armament is fit to fire.