Mike Cecil looks at the troubled beginnings of the GPMG M60 in Australian service...

With the change in the Australian Army's rifle calibre from .303-inch rimmed to 7.62-mm rimless during the 1950s, the writing was on the wall for other weapons chambered for the older cartridge, such as the Bren Light Machine Gun (pictured) and the Vickers Medium Machine Gun.  Cartridge standardisation was a high priority, both in terms of the agreement on a common calibre with our allies, and the logistical problems of supplying a multiplicity of cartridge types in the field. 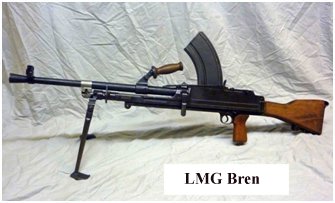 As a result, the Australian Army started seriously looking at a replacement machine gun chambered for the 7.62 x 51-mm calibre during 1957.  The matter was made all the more urgent by the imminent cessation of .303-inch cartridge production in Australia.

Initially, the Master General of the Ordnance Branch favoured reworking the Bren gun in the new calibre for the light machine gun role, and deferring the procurement of a medium machine gun replacement until some interesting overseas developments were more advanced.

Although the possibility of a Bren conversion was examined, the option was discarded on the basis of the differences in the Marks of guns then being converted in Britain to those available for conversion in Australia, and the probability that a local conversion program would interfere with the production of L1A1 SLR rifles at the Lithgow Small Arms Factory.  There were also some optimists within the Army who thought that an entirely new weapon could be procured in a shorter time than it would take to work up a satisfactory local Bren conversion. (Later, a quantity of converted Mark 3 Brens, designated the L4A4, were purchased by Australia.)

The British and Canadian Armies were also faced with the same problems of standardisation as Australia.  The British had conducted trials on six different weapons, narrowing the field to three after initial trials.  These were the Belgian MAG-58,(pictured) the British E-2, and the American M60.  The M60 was the least favoured and was eventually rejected as it did not meet the tactical requirement for indirect long range fire out to 4,000-yards, and it had what the British termed "technical deficiencies", such as a complicated stripping procedure.  The Canadians eventually rejected the M60 for similar reasons.

In the meantime, the Director of Infantry had put a case forward for a close look at the M60, as it was considered that this weapon might fill both the MMG and LMG roles: a true "General Purpose" machine gun.  The possibility was very attractive, so two M60s were obtained on loan, but they were not allowed to be fired, as they were pre-production weapons.

In 1959, the Australian Army decided to conduct trials on the M60 and the MAG-58, and examples of each were sought from the manufacturers.

Unfortunately, firing models of the M60 would not be available to Australia until at least the end of 1959, although the Director of Infantry was able to fire one while visiting the USA during 1959, and was strongly in favour of the weapon.

Consequently, when the Weapons and Equipment Policy Committee met on 18 December 1959, the "general purpose" nature of the gun, lighter weight than the MAG-58, and availability within a short 13-month time frame, together with a very favourable report by the then Director of Infantry, swayed the decision makers: the General Purpose Machine Gun (GPMG) M60 was to be Australia's new machine gun, replacing both the LMG and MMG then in service.(Pictured) This was despite the fact that no trials had yet taken place in Australia, and that reports from British, Canadian and USA sources had highlighted the difficult stripping and assembly procedures, and excessive breakages during trials.

As a consequence, during 1960, the Australian Army cancelled the order for MAG-58 trials weapons, and placed initial orders for a total of 971 M60 Machine Guns. With hindsight, and in the light of the exhaustive evaluation and development process conducted for all forms of Defence Force equipment today, it seems incredible that such an important item could be purchased without any form of local trials whatsoever!

On paper, the GPMG M60 was certainly a very attractive weapon.  Gas operated and fed by a disintergrating metal link belt, it weighed about 10.5-kilograms and could put about 550-rounds per minute down range. It came with an integral bipod, or could be mounted on the M122 tripod.  The operating mechanisms from two battle-proven German weapons of World War 2 were utilised in its design: the feed system of the MG-42 machine gun, and the bolt and locking system from the FG-42 selective fire rifle.

The first delivery of production M60's was in April 1961, when 6 arrived for initial training.  Five of these were immediately sent to the Infantry Centre, while the sixth went to the Australian Inspection Service's Proof Range (later the Small Arms Test Centre) at the Small Arms Ammunition Factory, Footscray, Victoria. Bulk deliveries commenced in February 1962, with the arrival of a consignment of 300 weapons. These were followed in early March by the second and third consignments of 100 weapons each, leaving 465 weapons of the initial contract to deliver.

Early M60s, including five of the weapons delivered to Australia in 1961, were manufactured by Springfield Armoury.  These had a four-digit serial number in the 3000 to 4300 range.  The sixth weapon with serial 9202 was manufactured by Saco-Lowell, as was the bulk of the Australian contract which had serial numbers in the 16000 to 18000 range.

Almost from the moment of issue, difficulties were experienced. Breakages and seizures occurred to such an extent that, by April 1962, just two months after the weapon had been issued in quantity, trials to assess component life and general reliability were requested!  These trials, conducted on weapons from all three consignments, concluded that the M60 was "...  not reliable in the sustained fire role due to the prevalence of component breakages ..." and that ".... the results [of the trials] should be referred to the USA for design consideration ...".  A scientist from the Army Design Establishment was subsequently sent to the USA to help solve the problems, and the outstanding part of the order was deferred until later improved production weapons became available.

Bipod breakages were another feature of the early M60 design, so much so that Australia seriously considered replacing these with modified Bren LMG Mk.2 (Aust) bipods, and a number of weapons were converted and trialed in 1963. One of the units involved, C Company 3RAR, strongly favoured the conversion, but by August 1963, it was decided to wait for the improved US design.

Many of the initial problems were eventually solved or diminished to an acceptable degree, and the M60 went on to serve the Australian Army and the RAAF well in a variety of applications.  Primarily used in the ground role for Section support, it was also mounted on vehicles during the Vietnam war, and, in the M60D version with the butt replaced by spade grips, was in use in the twin mount door gun role on the UH-1H Iroquois "Bushranger" helicopter gunship until its withdrawal from service a few years ago.

In the late 1970s, the US military chose the MAG-58 for use as a co-axial machine gun on armoured vehicles. Soon after its introduction into both the Army and Marine Corps, the weapon’s reliability saw its application expanded, effectively replacing the M60 in all roles. The US version, manufactured by an FN subsidiary in the United States, was designated the M240, and is currently in use in several variants.

With the commencement of the Small Arms Replacement Project (SARP) in 1982, the ageing GPMG M60's days in Australian service were numbered. Eventually, the M60 was replaced by two different weapons.  In the light role, the replacement was the F89 Minimi Light Support Weapon (LSW) in 5.56-mm calibre.

In the role of General Support Machine Gun (GSMG), it is somewhat ironic that the M60's replacement was the MAG-58, the weapon it was to be originally trialed against in 1959! 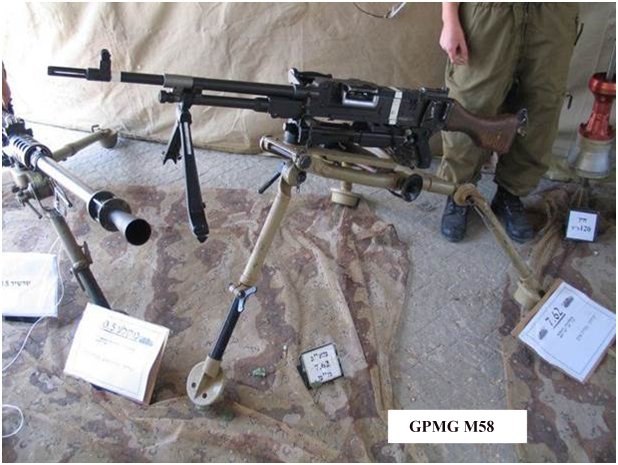 First Published in Army Magazine circa 1995. Reprinted with some revision.