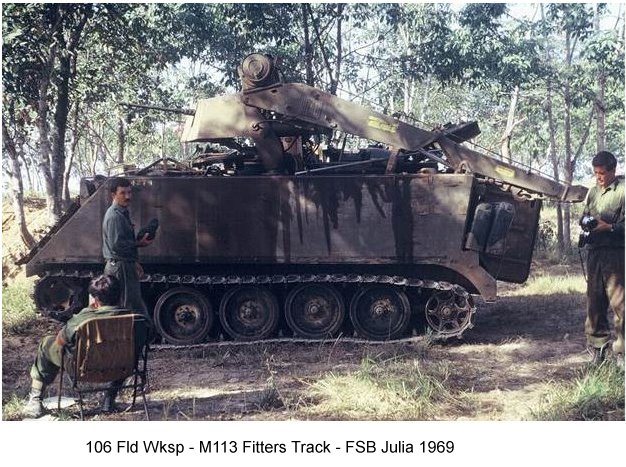 Feb. 69 I was called to the office of the CO of 106 Fd Wksp Vietnam, Maj. Claude Vivian Loftus Palmer (rotor button) to be greeted with the news that a bright shiny parade dressed RAEME reserve Major complete with peak cap and shined major badges is to go with me on a Forward Repair Team (FRT) operation up to Fire Support Base Julia to replace a mine damaged suspension station and idler.

I immediately tell C.V.L. I didn’t want to take him as he would get in the way and wouldn’t be of any help to me or the team, besides there wasn’t enough room on the Fitter’s track. End result! Thompson! he is going and that’s that!

From the word ‘GO’ this is a Major that is trying to exert his authority, I tell him he is a quest and must at all time obey my instructions if we get into any trouble. I tell him to remove his rank and I point him to the ‘Q’ store to get a jungle green bush fighter’s hat and if he is lucky, get a set of greens.

By this time I have loaded up the track with a replacement front left hand Suspension station and an Idler Wheel along with a 10 ton jack and 6x4 steel sheet and frame to carry the suspension station for easy fitting.

I get my crew together and we jump on the track and before we even start he wants a head set. I tell him I only have three, one for the driver, one for the gunner and one for me and I am in a hurry so he will have to go without. I tell him to sit up on the back on the hatch cover but he wants to sit next to me, well you can’t win them all.

I am met at the gate of Nui Dat taskforce with a track escort and we set off for FSB Julia. The trip up is uneventful. On arrival at FSB Julia (pictured) the Centurion tank already has it’s track off and the tank crew have already removed the road wheels or what’s left of them. We haul out the suspension spring. 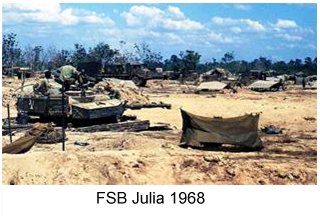 We unload, put the sheet of steel under the damaged suspension station to be removed so that we can operate the 10 ton jack on it, place the frame I made on the jack to take the weight of the suspension when it is unbolted. The suspension station is damaged to the extent that the bolt studs holding the station to the hull of the tank have to have their heads cut off with the oxy. We ease out the station from the hull and lower it.. Next we remove the station by using the jack to move it clear of the tank track guards. Our crane then can lift it clear of the tank. We have a large pair of 24 inch stillons, with them we remove the studs. Then clean out the stud holes with a thread tap, scrub the surface of the hull with a steel brush, we are now ready to fit the new suspension station.

The new suspension station is lifted onto the frame, rolled into position and fitted. Remove the jack and frame. Leave the jack, available to jack up the road wheel axles that will make it easier for the tank crew to fit the new road wheels. It’s only the idler wheel that has to be replaced and that’s not a big job.

The reserve Major went wandering. We loaded up the fitter’s track with the damaged suspension station and idler wheel and all our equipment. The tankies replace the road wheels, fit the track and they are ready to roll. It had taken us about 2 hours from when we arrived.

It’s all aboard and we head for the entrance. I had asked for as escort back to Nui Dat to be told I would have to wait for some hours before one become available, so I decided to free run. That is run without an escort.

We head off down highway 14 and after about 5 clicks (Km) we hear firing from a distance, I recognised it as small arm fire and we could see the muzzle flashes in the distance on the edge of the jungle.

I thought it might be aimed at us but I didn’t feel, hear bullets so I ordered Cpl Morrison the driver to speed up and the Gunner to cock the 50Cal machine gun and aim it toward the flashes. I then ordered the soldier behind the gun to fire a short bust aiming at the tops of the trees above the flashes, he did so. I knew once the enemy hear a 50 Cal going, they will disappear.

At this stage the Major comes to life and tells me he is the senior rank and he will take over. I thought he was joking until I see he has drawn his pistol, I have no idea what he was going to do with the pistol. I tell him to shut up and put the pistol away, I used colourful language, I then told the gunner to remove the belt from the 50 cal, unload it, put the belt back in place and put on the safety. The Major is still ranting and raving and of course threatening me by telling me he was in charge. By this time we are well down the highway and well clear of any potential danger.

When we arrive back at 106 the Major disappears and I supervise the unloading of the damaged suspension, it’s spring and the idler wheel that will be returned to stores.

Next minute I am summoned to the CO’s office and the Reserve Major is loud in his demanding that I be charge for insubordination and refusing to obey an order. I pointed out to C.V.L Palmer that the man put us in danger with his action and that he was in the wrong and if I was charged I would have plenty to say. Palmer told me I had no right talking to the Major as I did and I should respect rank, he then told me to write out a report.

I was never ever asked to take out a reservist again. 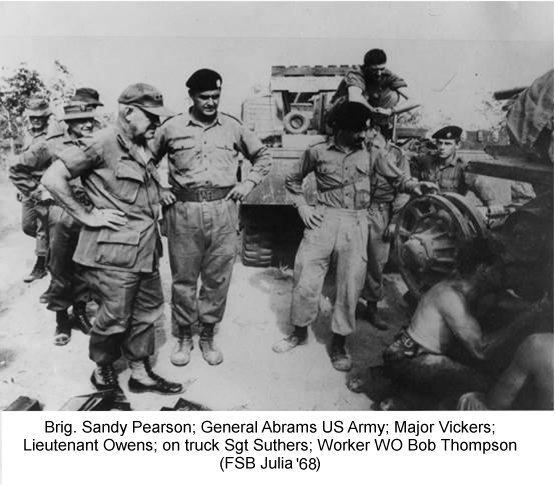