In 1967 I was OC 111 Light Ack Ack Battery LAD located at Woodside, S.A. The same year we did a combined exercise with the RAAF in the defence of Darwin. 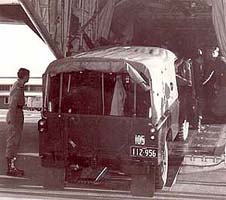 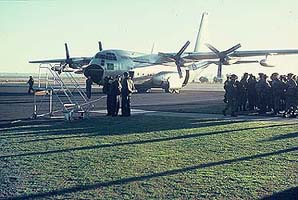 The RAAF were stationed at Tindal and all their resources had to come from that base.

The aim of the exercise was to defend the Darwin Airstrip from attack from our immediate neighbours to the north. Our resources were

Our Battery Commander was Maj. Neville Paisley and on his own initiative set up the guns around the International Darwin Airport. The guns were prominently placed around the main strip, with the Redeye Missiles placed on either end of the runway.

From the word go, I thought that we should have used another airport, one of the many on the main road south of Darwin.

I paint the picture, so that you can see what an International Pilot would see on his approach to the airstrip as he looks out of his cockpit window. Paisley had told the missile people that they could use the planes to practice on and all the guns were to do the same. We, his own staff told him you can't do that, but Nifty Neville knew better.

The first International Plane arrives, we all go to “RED” and the war begins. The aircraft KLM 707 aborts its approach, and the next 5 minutes we have an International Incident that has us packing up and moving out very quickly to the very near RAAF CRU and the Bloodhound Missiles site.

The guns are then sited around the coast on the beaches above the high tide mark.

I have to look after guns that are as far away as 7km around the beach but at high tide I have to drive up to 20Km. I find some overhead cover and set up the LAD very near the Battery Command Post. The main reason I am told to site it close to the Command Post, is that I am the only one with vehicles. The guns and equipment are held in storage at Darwin for such exercises. 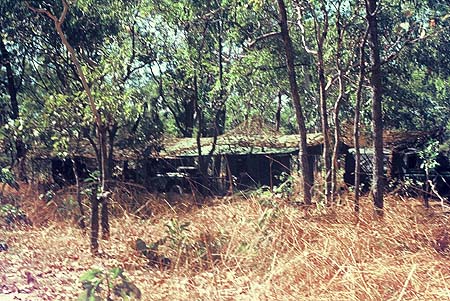 The Umpires are with us; the Cap aircraft (a Mirage) is up; we are all ready.
The RAAF radar is supposed to give us early warning on Yellow to Red.

About mid morning with about 30 seconds warning, which is as good as no warning at all, the CRU and us are bombed. We didn't even get the guns into action. Same again that afternoon. 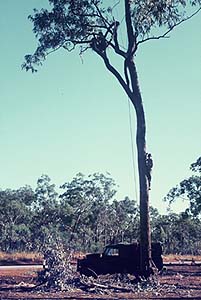 I go into conference with Paisley and his staff and we agree to put out Forward Observers. My men have to erect platforms up large trees. We take out a generator, long leads and drill holes in the trunks of trees, drive in ½ inch steel rods so that the Spotter can climb the trees and get to the platforms that we build. We built 4 of these. One Aircraft Spotter and his offsiders were placed on the water tower outside the Fanny Bay Hotel. This was a bad mistake, but that’s another story.

Next day it’s a repeat of what we have been going through. The gun crew are frustrated to say the least.

The day after we have what we thought was a good set up, I am driving around the beach to get to the Guns to check them over, when I stop and have a yarn with a fisherman. He tells me that the Radar set up is a joke, that it has a hole in it that everyone knows about, he even tells me where the hole is. We know where the hole is now we have been told there is one, because when the aircraft comes in to attack us, the compass bearing is recorded. It is now obvious the Mirages are going in behind Bathurst Island and starting their run from there.

I go back to Paisley and tell him and suggest that as we are both cleared to Top Secret that we should go up to the “CRU” and have a look around.

The set up in the “CRU” is like a large picture theatre in that where the screen is there is a huge plate glass window that has on it the map of the South East Asia from KL to Singapore and further south to Alice Springs. Behind the glass are horizontal, multi layered scaffolding stages that allow RAAF people to put up model aircraft and move them, following them to their destination? Any aircraft in that area can be clearly seen. We watched as civilian aircraft, were tracked from Bali to Darwin.

I met and old friend, a technician that I knew when I was in the RAAF, Flight Sgt Burgess. I spoke to him at length and then told him I knew about the hole in the radar. He was shocked and said nobody knew about that except maybe the pilots at Tindal.

I said no more and my old friend told me not to tell anyone.

I went back with Paisley and we had a chat about it and I suggested we get a fishing vessel and put on it a section of Observers and put it well out to sea, on the back bearing we have recorded. He did exactly that.

Next day we get a call from our Fishing Vessel Observers and we go to yellow and red and get our guns into action and score a hit or two. We were ready well before the CRU gave us any indication that we were under attack.

This went on for a couple of days and Paisley is called up to the CRU to explain how he can get the guns into action before the Radar see or fails to see them. There is no honour in the Artillery, Paisley with out hesitation tells them I told him. Next moment I am up speaking to the Wing Commander. I told him a fisherman told me and that was where it stayed.

It wasn't long after that the CRU was closed down, and the Bloodhounds were dismantled.

Some people say that fishermen are prone to exaggeration, but not this time. 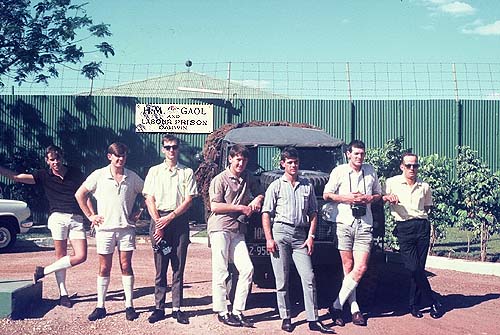 Members of the LAD outside Fanny Bay Prison ~ Darwin
From Left: ??